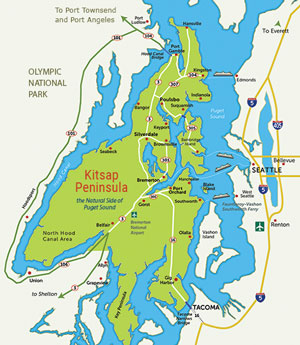 The mission of Visit Kitsap Peninsula is to create positive economic growth and development on the Kitsap Peninsula by effectively marketing the area as a world-class visitor destination. In non-pandemic years the tourism industry generates nearly $40,000,000 in sales tax revenues and provided jobs for nearly 8,000 people. It is one of the more productive and fastest growing economic sectors in Kitsap and in Washington State.

Visit Kitsap Peninsula was founded in 1983 and is a Washington State 501c6 non-profit membership based and economic development organization. The VKP is a member of the Washington State Destination Marketing Organizations (WSDMO) and recognized as the official agency responsible for providing information about the the Kitsap Peninsula. Offices are located in Silverdale, WA.

• Successful Branding Strategy: In 2009, initiated long-term regional branding strategy to position the Kitsap Peninsula region as a major visitor and event destination with focus on outdoor recreation and the region's natural environment. The branding theme "the Natural Side of Puget Sound" has been in use for nearly seven years and helps to position the region as an easily accessible, year round destination.